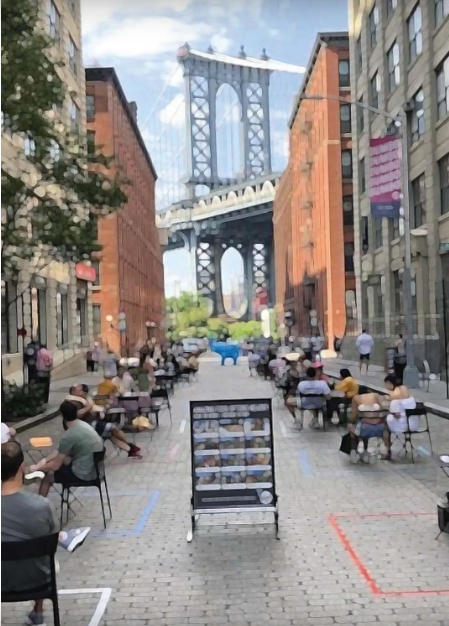 My husband and I were newlyweds when my cousin Himesh visited us in New York City in 2002. The last time I had seen Himesh was at my big Indian-Nigerian wedding where I wore a gold-embroidered sari and my husband looked regal in a wrapper and bowler hat. We united our two families with traditional ceremonies in an unforgettable weekend of food, music and dancing.

Now the party was over, and we were back to real life. In jeans and a tee shirt, I drove my vintage SUV through city streets with my trusty pit bull panting from the second row of seats.

I picked Himesh up from his Soho hotel for a visit to our apartment in Brooklyn. As we cruised through the Lower East Side, I kept the hand with the sparkling, new wedding ring on the steering wheel and left the other free to indicate points of interest.

“That’s Katz’s Delicatessen,” I said, gesturing at a storefront on Houston Street. “They have the most delicious pastrami sandwiches and matzo ball soup. It’s packed on Christmas since it’s a Jewish deli. The Chinese restaurants are busy that day, too. It’s a wonderful place, full of atmosphere, with pictures of notable New Yorkers on the wall. You know, it’s where they filmed the famous scene from that Billy Crystal movie.”

Himesh glanced in the direction without saying anything.

“And look a little further down that street, there’s a tea shop owned by the musician Moby. I don’t know any of Moby’s music but the tea is decent. It’s worth visiting if you’re a vegan.”

We merged onto the Williamsburg Bridge and crossed the East River. I nodded at a building to our right. “Over there is Peter Luger’s, a famous steakhouse. I’ve always wanted to try it but I haven’t been yet. Seems like the type of place you need a corporate card to go to, so you can charge it back to your clients.”

I exited off the bridge, then instead of heading towards my loft, I drove in the direction of the river. “I just want to show you this one place by the overpass. It’s full of hipsters. They have the best burgers and fries. It’s dog friendly so we walk over there on the weekends with Roxie, and I always order the fried egg sandwich.” I pulled into a spot opposite a shiny, retrofitted railcar. We stared at it for a while then I pulled out of the space and headed toward the neighbourhood’s main shopping area.

I pointed out my preferred coffee shop, pizza parlour and the Thai restaurant where we ate on the night my husband proposed. We passed the neighbourhood bistro with the heavenly mac and cheese where I celebrated my 26th birthday. I showed Himesh the Greek diner that I predicted would be condemned by the board of health and the little Mexican grocery store that sold empanadas from a counter in the back.

As we sped in the direction of our loft, I nodded at an abandoned-looking Middle Eastern restaurant. “This place was never popular, but after 9/11, it’s a ghost town. What a shame. That was someone’s livelihood.”

I parked the car outside my building and turned to Himesh. “I forgot to ask. Are you hungry? What are you in the mood for?”

Himesh stared at me for a second, puzzled. “You know, I swore you were different. You grew up in the U.S. You had to fight your parents to become a writer and to marry a Nigerian. You were supposed to be a trailblazer. But I was wrong. You’re just like everyone else in our family. All you care about is food.”

We sat there, his words hanging heavy in the air. I thought back through everything I had told him that afternoon. I hadn’t noticed how myopic my view of New York City was. I couldn’t possibly be a normal human being if I saw the world through a prism of food.

After a few minutes of silence, I shrugged. “Anyway, it’s almost dinner time. Do you want to grab some sushi? I know a terrific place.”

“I don’t mind,” he said. We got out of the car, leashed Roxie and walked out into the darkening Brooklyn streets.

Spot of the Month - Indomie Cafe

In Nigeria, there is no bigger food legend than the Indomie darling. For over 30 years, Indomie...