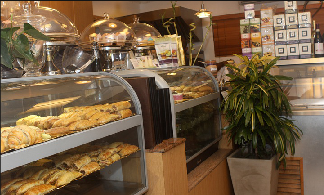 This café with its orchid garden is a breath of fresh air. A gourmet cafe and restaurant that caters to those with a sophisticated pallet. If you’re looking for good food, done well then The Orchid Bistro won't disappoint. They also do a fabulous English Breakfast, with real sausages and bacon. Don’t miss the Sunday buffet brunch. They have their own bakery, Robert’s Cakes, Pastries and more so you know you will only receive the freshest baked goods. Oh and don’t forget to have a cup of Chai Latte. Sun-Thurs: 7am-11pm, Fri-Sat: 7am-10pm
Perks We have 0 perks.
Map Unavailable

The food here is less than 2 stars and the only saving grace here was the manager. I went during Mastercard restaurant week and everything I ate there had issues. From a soap tasting salad to a subpar shepard's pie that was begging for flavour to a slice of cheesecake that was not bad but for the soggy bottom that made the consistency of the cake very odd when chewing it. I decided to splurge a bit by buying the apple crumble and was immediately disappointed by all it had to offer. This was my second time going there and the first time was more pleasant than this. A little bit of issue also cropped up when I sat down to dine, I wanted to read a book on my iPad and mid read, I was told that use of tablet/computers are not allowed in the restaurant. I was ready to call it quits and go else where for lunch but the manager stepped in and his finesse in handling problem was surprisingly good. Somehow, I found myself dining in the beautiful outdoor garden area instead with flies buzzing around me. Not a fan of skin bites. Overall, I really should have gone elsewhere.

I went to OB this morning for breakfast on my way to work. Got a meat pie and muffin. They both tasted great and the service was quick. Great Stuff!