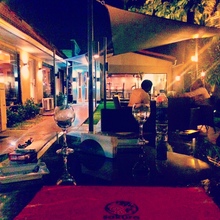 Sakura brings you a culmination of the finest culinary delights from across Asia onto your plate. they bring the Far East a little bit closer.with one of the coolest environment and friendly staffs,you will eat and be back again.

I visited this restaurant on a weekday as I wanted as little hassle as possible. I visited specifically to try out the mastercard menu, and so called in twice to check they had a lunch menu available, which they mentioned they did. This was not the case though as on getting there i was given a dinner menu in place of the lunch menu. This wasnt really a big deal but i was baffled as to why i wasnt told over the phone even though i asked repeatedly. Moving on though, the restaurant has a really nice ambience, order was taken on time and brought in on time as well so points for this. I had the lunch menu from a restaurant they share the space with (quite confusing) , and got the hummus as my starter, margherita pizza for my main and Lebanese sweet for desert. To be honest everything was lackluster and i wouldn't go back again. I think my disappointment was heightened by the fact that I didn't try what I set out to. A 5/10 from me

Great food and ambience. Sushi is on point and their shrimp tastes amazing. Would definitely recommend this place for Japanese cuisine lovers

As long as the owners are around this place is amazing. Love the ambiance and food is good too.